The Knight Owl is the CyberKnights’ 2019 robots designed to compete in FIRST Destination: Deep Space.

The Dark Knight is the CyberKnights’ 2018 robot and is designed to compete in FIRST POWER UP.   It features a three stage aluminum mast attached to a six CIM six wheel drop center drivetrain.   The robot also has a pneumatic assisted drop down platform to help lift partners.  The Dark Knight is capable of 3 cube, opposite side scale autonomous.  You can see the full spec sheet here. 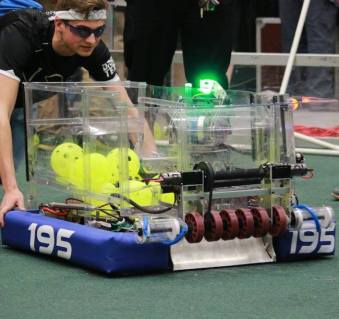 Knightro is the robot for the CyberKnight’s 2017 FRC season.  A fully loaded robot with a rapid firing turret and a highly accurate targeting camera, judging direction and distance.

Knightro is also equipped with a wide, efficient intake to quickly fill its large capacity hopper. The dual pronged gear pickup can retrieve gears from the floor and has automated gear placement.

Multiple Autonomous modes are available based on alliance strategy, including the ability to achieve 40 kPa in autonomous.  Knightro has a fast and reliable climber and is very agile, with a 2 speed, 8 Wheeled drive train powered by 6 CIMs. 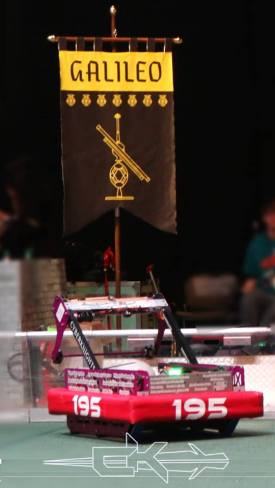 Knight Fury is the robot for the CyberKnight’s 2016 FRC season. Breaking down defenses all the way to the Einstein Field itself, Knight Fury features a CAN bus system for reliable connections to all motor controllers, a two speed Andymark sonic shifter gearbox, rhino treads, and auto-alignment systems.

This all translates to a robot with a two ball autonomous, a fast and reliable climber, a consistent catapult and the capability of crossing almost any defense. Knight Fury was designed to shoot from virtually anywhere inside the opponent’s tower zone, whether it be from the far corner or at the tower itself. Four CIM motors, each attached with a sensor, provided the robot with unprecedented speed, agility, as well as self-adjustment. 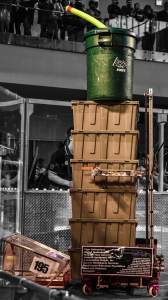 OSCAR is Team 195’s robot for the 2015 FRC Game, “Recycle Rush”. It features an Andymark kit swerve drive with Banebot 775 drive motors and am-700 encoder steer motors. We designed OSCAR to have a stacker that is capable of lifting 6 totes with two degrees of freedom. These totes are stood in place by a pneumatic clamp and pneumatic stabilizer that apply a force of about 200 pounds. The robot also features a tethered ramp for ease of standing.

The F-195 KnightHawk is Team 195’s robot for the 2014 FRC Game “Aerial Assist”. This robot features a 6-CIM motor drivetrain that powers 4 of the 6 wheels. We use 4” Hi-Grip wheels in the middle and rear with 4” Omni-wheels in the front for additional turning speed. The F-195 KnightHawk has a unique intake considering it can quickly grab a ball that is in front of the robot or to either side. Additionally, the intake can move up and down, allowing the robot to grab balls that are bouncing across the field by clamping on them. We use surgical tubing mounted on PVC pipes to grip the ball and center it in front of the launching mechanism.

Our launching system consists of an aluminum plunger on a steel box-channel that is propelled into the ball by surgical tubing. We are able to retract the plunger to different spots to allow for variability in the force from the plunger on the ball. To give our robot variable shooting angles, the entire body can move to pre-defined heights. The body moves on a rack which is assisted by surgical tubing. Finally, the F-195 KnightHawk features vision processing. We can track hot-goals in autonomous with a wide-angle camera and two led panels mounted on an angle to reach both goals simultaneously.

With a 12 inch polyurethane and aluminum shooter wheel, full-court and close range accurate shooting capabilities, 4 wheel drive, an elevating shooter table and a quick-load system, the Cyber Knights’ 2013 robot, OddJob, can make it rain. Controlled by an extremely stable PID loop and carried by the momentum of its gargantuan size, our wheel and shooter assembly can fire frisbees full court with precision.

Most teams choose pneumatic wheels or small rollers to shoot their frisbees. However, with the momentum and power generated by our wheel it can fire up to 4 frisbees within 2-3 seconds while losing only 100-200 rpm. This powerful shooter not only maintains consistency, but allows for OddJob to fire frisbees over 30 yards. The “Whale Tale” frisbee loading system allows for quick access, loading, and easy alignment to the feeder station. This gives OddJob the ability to rain frisbees across the field at an extremely fast rate. Combined with a camera for vision targeting, a powerful shooter assembly, and easy-loading system, OddJob can outscore the competition.

Our climber is quick and efficient. Locking into place on the 10 point tier, OddJob doesn’t need to climb any higher to exceed scores of over 150. When the volunteers empty the overflowing 3-point goal, frisbees rain down onto the floor. Oddjob made it rain in the competition in Connecticut and did the same in St. Louis all the way to the semi-finals of the Newton Division.

In one drive mode (standard Arcade drive) the modules are all set to different angles so that the robot will turn on a radius. In another drive mode the wheels are all angled in the direction the joystick points in, allowing the robot to translate in any direction. In yet another drive mode, the wheels are all turned perpendicular to the center of the robot, allowing the robot to precisely rotate about its central axis. This incredible control over our drive system, combined with four skid plates for crossing the central barrier, allows the robot to compete with an unparalleled level of speed, maneuverability, and flexibility. Our intake and collection system has proven to be simple yet effective. Its width ensures that our robot can pick up balls quickly and with ease, delivering the balls to the shooter in about a second.

Additionally, an infrared sensor mounted at the top of the intake system is used to control the flow of balls into the shooter during the Hybrid period of the game. The three-stage “Linear Accelerator” shooter is the primary feature on this year’s robot. While most teams have elected to use a single wheel or roller to accelerate the balls, our robot uses three separate rollers arranged on an angle to gradually accelerate the game piece through the robot. The lowest roller spins slower than the middle roller, which itself spins slower than the final roller. This gradual acceleration greatly increases consistency and helps mitigate ball density issues. Our bridge actuation arm has proven to be consistent and reliable, able to effectively tip the bridge to the floor both from the front and back of our robot. This affords our drivers a great deal of flexibility both in acquiring balls from the bridge and positioning themselves for the end-game.

The Screaming Knight has proven to be very successful, finishing in the finals at the 2012 NYC regional and winning the 2012 CT regional after seeding 4th. It also received the Industrial Design Award (NYC) and the Excellence in Engineering Award (CT).

The Knightmare 2k11 is the robot that the Cyber Knights designed for the 2011 FRC game LogoMotion. Its primary features are a two-part elevator and a pivoting gripper that grabs tubes from the inside. Fully extended, the robot can reach just under 130 inches. The elevator can move from the floor to its maximum height in about 1.5 seconds. As a result, it is able to score quickly on any scoring peg. The gripper and pivot can pick up a tube from the floor in just under a second, and likewise can place a tube on a scoring peg in around a second.

The drive system affords a great deal of speed and maneuverability. It features two treaded wheels in the center driven directly by the transmissions, and then four omni wheels, two on each end of the robot, allow the robot to turn more easily. The center treaded wheels have been dropped a fraction of an inch in order to increase the amount of weight resting on those wheels and, subsequently, increase their traction. This gives the robot greater control ability and power while maintaining speed and stability. In addition, advanced programming has greatly increased our robot’s efficiency. Picking up and scoring a tube requires only one button to be pressed, and the elevator moves automatically to one of the pre-programmed peg heights with the press of a button. These pre-programmed actions are carried out more quickly and efficiently than any human could, allowing the robot to score more tubes in a match than most other competitors. On that note, our autonomous program operates with unparalleled efficiency and consistency – at the CT regional it successfully hung the ubertube in every single match (16 out of 16 times!)

However, that is only one robot. The mini-bot is able to climb the pole in about 1.1 seconds. The mini-bot deployment system features a pivoting arm that drops down from the back of the robot. The arm hovers a few inches above the base of the tower. At exactly 10 seconds remaining the arm is dropped all the way down so that a mechanical latch releases the mini-bot. The mini-bot travels along this arm and hits the pole in a fraction of a second, at which point it begins climbing the pole.

All of the CyberKnights’ robots are designed using SolidWorks 3D CAD Software.  Thank you to them for their generous support and help in advancing STEM education.